Made possible by grants, partnerships, and the Stormwater Utility, The City is able to fund projects to restore sections of the Scenic Kokosing River

MOUNT VERNON – In 2016, the City of Mount Vernon started taking steps to address the Kokosing River corridor along Ariel Foundation Park and Phillips Drive. With the aid of the ODNR Scenic Rivers Program, The US Army Corps of Engineers, US EPA, Ohio EPA, Muskingum Watershed Conservancy District, The Shade Tree and Beautification Commission, The Ariel Foundation, The Foundation Park Conservancy and the Mount Vernon Stormwater Utility, the City identified three locations of degraded habitat and active erosion along the scenic Kokosing River. On or around March 8, 2021, the City begins construction of those plans for both habitat improvement and river bank stability.

Titled The Armstrong Run Restoration Project , these locations will be improved in three phases: West Lake (phase one), Norton Street (phase two), and Phillips Drive (phase three). In order to take on these projects, the city has acquired two grants and will be able to match funds locally.

The City of Mount Vernon’s Stormwater Utility will contribute $260,518 to the Armstrong Restoration Project, matching funds from an Ohio EPA 319(h) grant for $300,000 along with a $200,000 grant from the Muskingum Watershed Conservancy District which will provide habitat improvements and structural stability along the Kokosing River and West Lake.

The third aspect of sustainability, Starr explained, was with regard to the economic factors, “because we were able to use some of our own stormwater utility money, we were able to leverage much more financial support through these wonderful agencies to meet some of our objectives,” said Starr. “It’s always great when we get back some of our federal and state tax dollars.”

The Ohio EPA 319(h) Grant is a part of the Ohio Nonpoint Source Pollution Control Program. This is a program focused on eliminating sources of pollution resulting from land use and/or man-made changes to a river rather than from a single point of discharge, such as industrial contaminants. These are labeled as nonpoint sources which are commonly polluted runoff from rain or snow melt that flows into a river collecting harmful contaminants along the way and physical alterations to the river channel such as tree removal from banks, construction of dams, or the physical straightening of rivers. The 319(h) grant allows for communities to gain federal funding to improve areas containing nonpoint sources to reduce the contaminants entering water sources.

The Muskingum Watershed Conservancy District is an organization that supports the conservation of Ohio’s largest drainage system, the Muskingum Watershed. Covering over 8,000 square miles and spanning 5 counties and portions of 22 others, the Conservancy is a political organization, created to reduce the effects of flooding and conserve water for the benefit of the public. They offer funding that will maintain and restore portions of this watershed so that they can obtain the goals to reduce flooding and conserve water.

The three projects will directly decrease nonpoint source pollution and improve river habitat as well as stabilize erosion. Heather Doherty from the Ohio Department of Natural Resources Scenic Rivers Program has played a key role by assessing river habitat early in the project and developing the watershed plan that was a condition for the city’s application for EPA funding.

“With its high water quality and recreational draw, the Kokosing State Scenic River is already an asset to the city,” said Doherty. “These projects will improve stream habitats to support healthier fish populations, reduce downstream flooding, protect city infrastructure, and improve views and access points for residents to the river downtown.”

Phase one and two were designed by EMH&T’s Miles Hebert, P.E., and his staff, with reviews completed by Shawn Bleiler, Engineering Technician for The City of Mount Vernon, and City Engineer Brian Ball P.E.. West Lake (phase one) is a two-part project that will restore approximately 125 linear feet of severely unstable streambank, 500 linear feet of riparian areas and create a 5-year event floodplain connection. The bank was severely eroded due to a flood event in 2017 that left a direct connection between the West Lake and the Kokosing River. Norton street (phase two) will utilize natural channel design techniques to restore approximately 700 linear feet of river bank to disconnect the back water channel. Phase one part one and phase two are currently out to bid.

Philips Drive (phase three) was designed by Shawn Bleiler and Brian Ball, P.E. with the assistance of two MVNU engineering student interns, Cannaan Dennison and Dustin Shenberger. The bids for the phase three project were opened in December, 2020, and the contract was awarded to Environmental Remediation Contractor. The US Army Corps of Engineers and the Ohio EPA have already issued all the permits for the phase three site and work is planned to start on or about March 8, 2021, with the goal to restore approximately 800 linear feet of failing and unstable streambank and riparian areas. 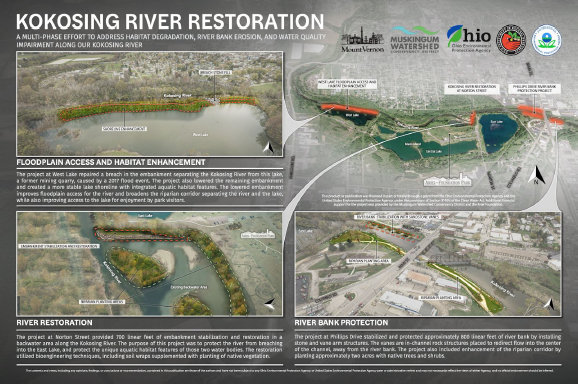 The project is expected to wrap this summer. As part of the 319(h) Grant deliverables for fund recipients, various educational materials are being provided to the public to explain the work being completed to improve the river and the water that flows and affects all downstream activity. The sign pictured below is one of the materials that will be posted in public locations to inform people about the success of this project once all phases are completed along the scenic Kokosing River. More information about this project as well as other updates can be found at mountvernonohio.org.

The contents and views, including any opinions, findings, or conclusions or recommendation, contained in this publication are those of the authors and have not been subject to any Ohio Environmental Protection Agency or United States Environmental Protection Agency peer or administrative review and may not necessarily reflect the views of either Agency, and no official endorsement should be inferred.