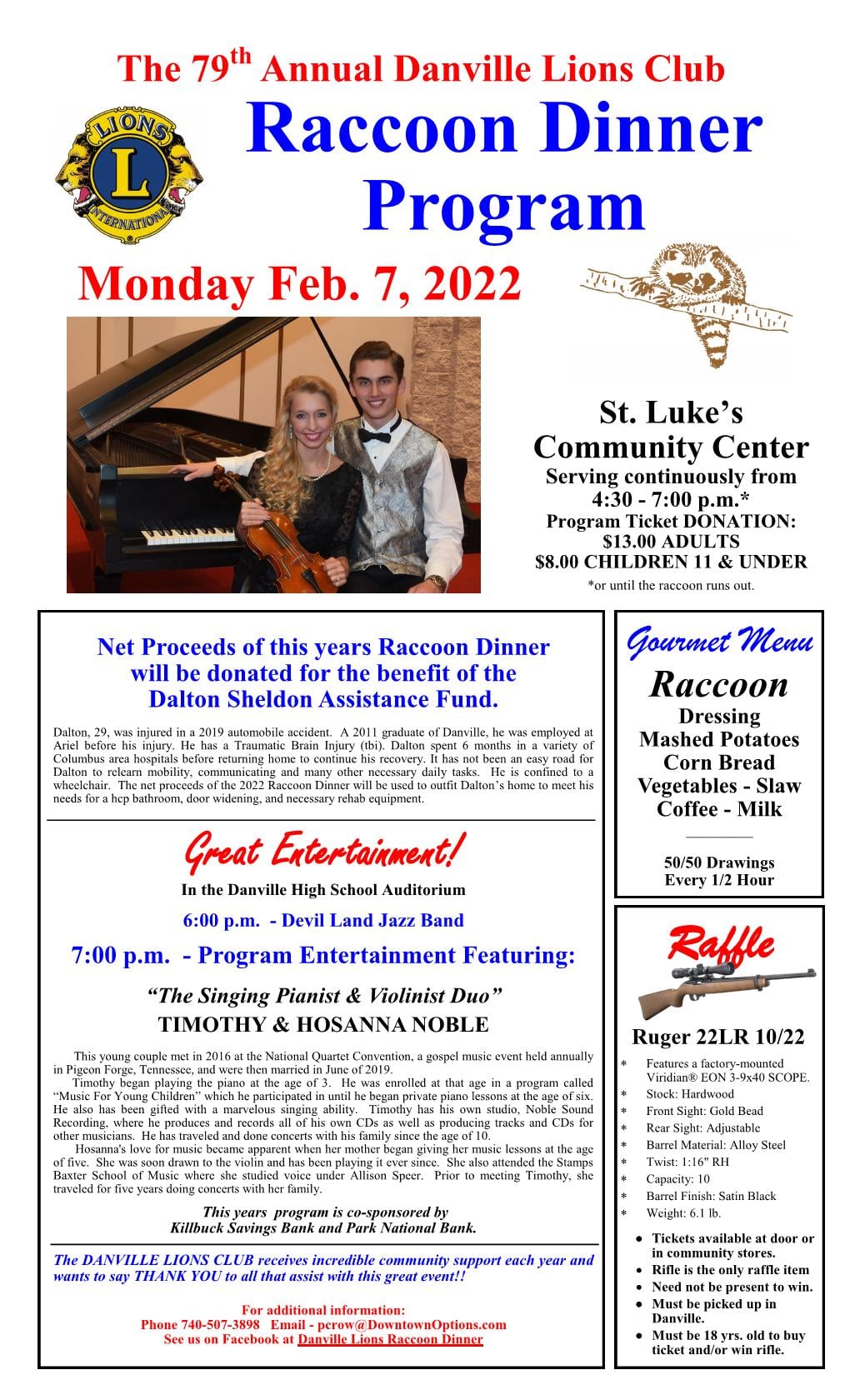 The 2022 Danville Lions Club Raccoon Dinner will be held Monday, February 7th at the St. Luke’s Community Center, located immediately behind the Danville St. Luke’s Catholic Church. The meal will be served from 4:30 until 7:00 p.m. on a first come, first served basis. At 6:00 p.m., the Devil Land Jazz Band will perform for the attendees across the street from the Community Center in the High School Auditorium.
The main event will follow the band at 7:00 p.m. with a musical presentation by TIMOTHY & HOSANNA NOBLE “The Singing Pianist & Violinist Duo.” A raffle drawing for a Ruger 22LR 10/22 with Scope will be held at 7:00 at the program location, tickets are available at the door and at various locations in Danville.
Net Proceeds of this event will be donated for the benefit of the Dalton Sheldon Fund. Dalton, 29, was injured in a 2019 automobile accident. A 2011 graduate of Danville, he was employed at Ariel before his injury. He has a Traumatic Brain Injury (TBI). Dalton spent 6 months in a variety of Columbus area hospitals before returning home to continue his recovery. It has not been an easy road for Dalton to relearn mobility, communicating and many other necessary daily tasks. He is confined to a wheelchair. The net proceeds of the 2022 Raccoon Dinner will be used to outfit Dalton’s home to meet his needs for a hcp bathroom, door widening, and necessary rehab equipment.
If you are not able to attend, direct donations to Dalton’s fund are welcome and appreciated to Danville Lions Club for Dalton Sheldon Fund, PO Box 506, Danville, OH 43014.
Timothy and Hosanna Noble met in 2016 at the National Quartet Convention, a gospel music event held annually in Pigeon Forge, Tennessee, and were then married in June of 2019. Timothy began playing the piano at the age of 3. He was enrolled at that age in a program called “Music For Young Children” which he participated in until he began private piano lessons at the age of six. He also has been gifted with a marvelous singing ability. Timothy has his own studio, Noble Sound Recording, where he produces and records all of his own CDs as well as producing tracks and CDs for other musicians. He has traveled and done concerts with his family since the age of 10.
Hosanna’s love for music became apparent when her mother began giving her music lessons at the age of five. She was soon drawn to the violin and has been playing it ever since. She also attended the Stamps Baxter School of Music where she studied voice under Allison Speer. Prior to meeting Timothy, she traveled for five years doing concerts with her family.
Clyde Banbury and Clyde Cornell started the first Raccoon Dinner. The meal was served in Banbury’s basement with 30 in attendance. After a few years, the annual dinner was moved to the elementary building at the school cafeteria since the interest in attending was dramatically increasing. As the event evolved, guest speakers were included as part of the program. There have been many notable and outstanding speakers such as Ohio Governor Jim Rhodes, OSU head coaches Woody Hayes and John Cooper, Gordy Coleman (Cincinnati Reds), Jerry Razor (newscaster), Ed Johnson, Steve Newman, Andy Geiger, Bill Conley, Craig Krenzel, Greg Frey, Katie Smith, Matt Finkus, Bobby Carpenter, and many more. The largest attendance to the event was over 800 people.
At the Dinner, almost 500 pounds of raccoon is served as the entree coupled with a full course setting of mashed potatoes, gravy, dressing, mixed vegetables, and a generous serving of fresh homemade cornbread. A limited amount of ham is prepared for those wishing to attend whose health may not permit them to consume the raccoon.
The participants come from all over the United States and Canada to attend this famous event. Past events have seen a gentleman fly up from Missouri in his airplane just for the dinner and a newspaper editor come from Pennsylvania attending to enjoy the unique cuisine. The event has had visitors from places as far away as Russia and Egypt. The 83-year-old Danville Lions Club, chartered in 1939, was sponsored jointly by the Fredericktown and Mount Vernon Lions Clubs. Since the beginning, the Club has truly lived up to the Lions Motto “We Serve.” They have sponsored and facilitated many hundreds of fundraising events and service projects to help the Danville area community and its citizens.
For the safety of all, face masks are encouraged, but not required.