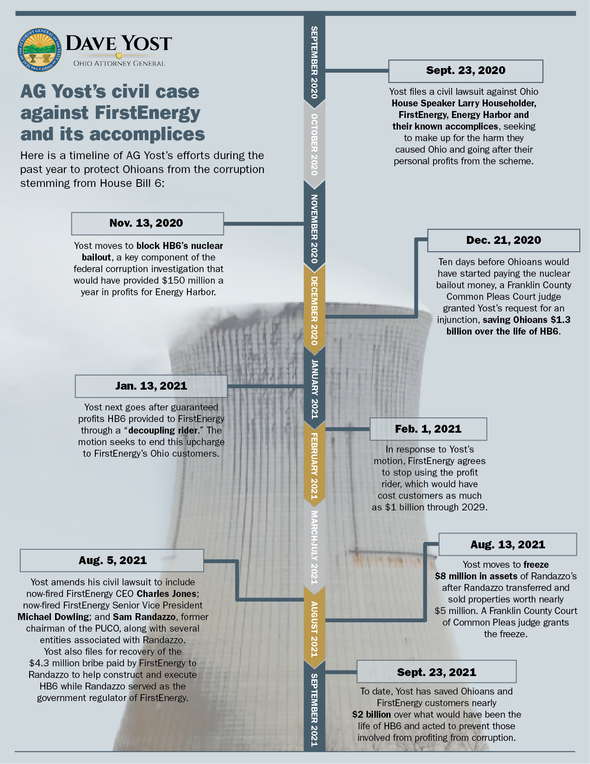 His relentless pursuit of justice has paid off handsomely, saving Ohioans nearly $2 billion over the life of HB6.

“I have used, and will continue to grab, every tool available to this office to dismantle this illegal bill and hold accountable those who were part of the unholy alliance,” Yost said. “Corruption has no place in Ohio, and it will be stopped at every turn – no matter who is involved.”

House Bill 6 was enacted in 2019 to collect $1.3 billion from “ratepayers” — otherwise known as Ohio residents — to subsidize two Ohio nuclear plants owned by Energy Harbor, formerly part of FirstEnergy. The bill is at the center of a federal bribery case involving FirstEnergy, former Ohio House Speaker Larry Householder and their accomplices.

To that end, the Attorney General fired his first shot on Sept. 23, 2020, a civil lawsuit against FirstEnergy, Householder and their known accomplices seeking to make up for the harm they caused Ohio and going after their personal profits from the scheme.

The lawsuit marked the beginning of a series of court actions by Yost in the past 12 months aimed at halting FirstEnergy’s cash grab.

The second round sounded in November 2020, with Yost moving to block FirstEnergy from collecting the nuclear bailout money from Ohioans – which would have provided $150 million a year in excess profits to Energy Harbor.

And the savings for Ohioans didn’t end there.

In January, Yost sought to freeze the guaranteed profits provided to FirstEnergy under HB6 through a so-called “decoupling” rider. The provision was intended to allow FirstEnergy to adjust its rates to ensure that the company annually matched the record profits it made in 2018, a year of extreme cold and extreme heat in Ohio.

In response to Yost’s motion, FirstEnergy agreed to stop using the profit rider, saving Ohio customers as much as $1 billion through 2029.

The scheme was stopped. Still, there was more to do.

This summer, federal investigators announced that FirstEnergy admitted to paying Sam Randazzo, the former chairman of Public Utilities Commission of Ohio, a $4.3 million bribe in 2019 weeks before he was appointed as the state’s public utilities regulator.

Yost then became aware that Randazzo had begun unloading his properties, selling four properties with a combined value of nearly $5 million and transferring a house worth more than $500,000 to his son for free. With the liquidation occurring, Yost sought a court order to freeze nearly $8 million of Randazzo’s assets to preserve them for possible collection by the state. Last month, a judge agreed, and Randazzo’s assets remain subject to seizure while the federal criminal investigation continues.

While waiting for the completion of the criminal prosecutions, Yost’s civil case remains ongoing through informal fact finding and defending Randazzo’s appeal. Yost is also monitoring the actions and assets of those named as defendants in his case to see if additional steps are needed to preserve assets to make Ohio whole from this scheme.