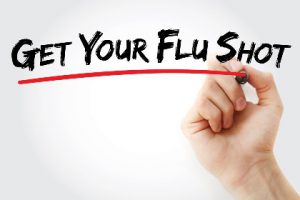 COLUMBUS – With the arrival of flu season, the Ohio Department of Health (ODH) is recommending that all Ohioans six months and older get a flu shot now. Flu activity usually begins to increase in October and can last as late as May, with cases typically peaking between December and February.

“If you get sick with the flu, stay home from work or school to prevent spreading it to others,” said Dr. Acton.

Although most people fully recover from the flu, some experience severe illness like pneumonia and respiratory failure, and the flu can sometimes be fatal. People who think that they may have the flu and are pregnant, have an underlying medical condition, or who are extremely ill should contact their healthcare provider immediately.

Flu vaccines are offered by many doctor’s offices, clinics, health departments, pharmacies, and college health centers, as well as by many employers and some schools. While vaccination provides the greatest protection against the flu, other effective ways to avoid getting or spreading it include: washing your hands frequently or using alcohol-based hand sanitizer; covering coughs and sneezes with tissues or coughing or sneezing into your elbow; avoiding touching your eyes, nose, and mouth; and staying home when sick until fever-free for 24 hours without using fever-reducing medication.

CDC recommends that healthcare providers administer prescription antiviral medication as a second line of defense as soon as possible to patients with confirmed or suspected flu who are hospitalized, have severe illness, or who may be at higher risk for flu complications.

While only moderate in severity, last year’s flu season was record-breaking in duration, with flu activity remaining high for 21 weeks. The United States had two different waves of flu, the first caused by H1N1 viruses and the second caused by H3N2 viruses.

Flu vaccine manufacturers report that there will be plenty of vaccine for this year’s flu season. More information about influenza and flu activity in Ohio is available at www.flu.ohio.gov.