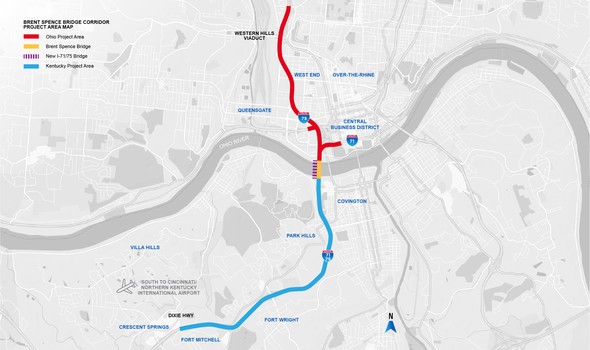 (CINCINNATI) — Ohio Governor Mike DeWine and Kentucky Governor Andy Beshear announced today that they have jointly submitted an application requesting nearly $2 billion in federal funding to make much-needed improvements to the Brent Spence Bridge Corridor that runs through Northern Kentucky and the City of Cincinnati.

“The Brent Spence Bridge Corridor is a vital centerpiece to the interstate system of the United States, and we are optimistic that the federal government will recognize the importance of this project for both our national economy and national security,” said Governor DeWine. “With the current supply chain crisis in our country, the issue of ensuring that this major transportation corridor stays open and moving has never been more urgent.”

“Ohio and Kentucky are working together to seize this once-in-a-generation opportunity to improve the quality of life for the millions of Americans who use the federal highway system to travel between our two states,” said Governor Beshear. “I pledged to fight for every available federal dollar and have a shovel-ready project once funding is secured. The time is now to invest in transformative infrastructure that supports our growing workforce and safe travel along one of the nation’s most important commerce corridors.”

Governors DeWine and Beshear announced their intent to request funding from the U.S. Department of Transportation in February.

Ohio and Kentucky are seeking $1.66 billion in federal grant funding through the Multimodal Projects Discretionary Grant. The grant request represents approximately 60 percent of the remaining $2.77 billion project cost. Each state will also allocate significant state and other federal dollars toward the project. The states will split the cost of the new bridge 50/50, and each state will be responsible for the needed work on its side of the border.

The Ohio Department of Transportation (ODOT) and the Kentucky Transportation Cabinet (KYTC) recently announced that engineering work on the project will move forward as the federal government considers the application. ODOT and KYTC will also continue to work on acquiring property needed to construct the project and will begin meeting with companies interested in working on this historic bridge project.

The Brent Spence Bridge Corridor project will construct a critical companion bridge next to the existing Brent Spence Bridge to improve traffic flow and safety. Improvements will also be made to the interstate network on either side of the bridges throughout an eight-mile corridor from the Western Hills Viaduct interchange in Ohio to Dixie Highway in Kentucky.

The Brent Spence Bridge, which carries Interstates 71 and 75 over the Ohio River, is currently accommodating more than 160,000 vehicles per day, twice the capacity it was designed to safely accommodate when it opened in 1963. The bridge also carries nearly 43 million tons of goods by truck annually.

This additional capacity that will be created through the Brent Spence Bridge Corridor Project will alleviate congestion, improve safety, and open up this nationally significant freight corridor, which carries an estimated 3 percent of the nation’s gross domestic product annually.

Business, transportation, political, civic, and community leaders have come together to ensure that the Brent Spence Bridge Corridor Project is successful. More than 200 letters were submitted in support of the grant application. The letters represent support from public officials, associations, and businesses at the local, state, and national levels.

“I am pleased to see Ohio and Kentucky are working hand-in-hand to obtain federal funds for this the Brent Spence Corridor project. The Corridor project is the exact sort of regionally significant, economically transformative project that should be funded through the bipartisan infrastructure law.” -United States Senator Rob Portman (R-Ohio)

“The Corridor Project represents a once-in-a-generation opportunity with a strong bi-state commitment to improve both quality of life and equitable access to employment hubs and other destinations for those who live and work in the region.” -Mayor Aftab Pureval, City of Cincinnati

“The City of Covington is proud to be part of the regional coalition that supports this critical project locally, regionally, and nationally. We fully support this funding request and look forward to the successful completion of the Brent Spence Bridge Corridor Project.” -Mayor Joseph Meyer, City of Covington