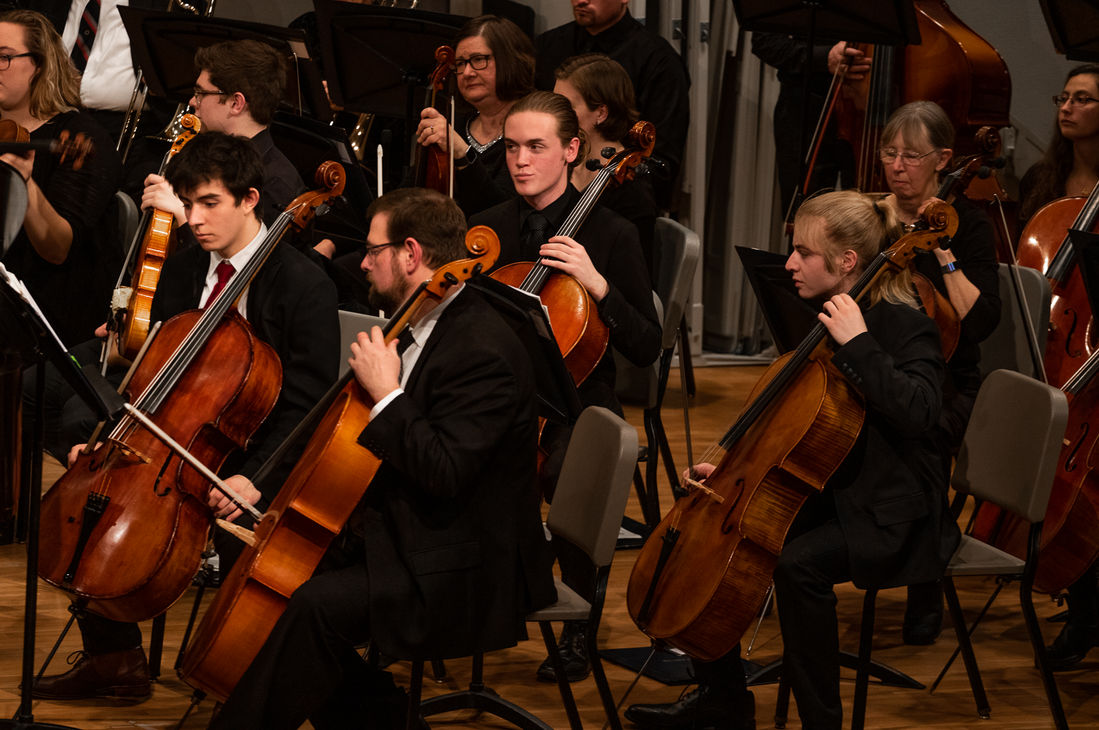 The Knox County Symphony will present its final concert of the season on Sunday, May 1, 2022, at 7:30 p.m. in Rosse Hall Auditorium on the campus of Kenyon College. The main portion of the concert is a performance of the “Requiem in D Minor” by Wolfgang Amadeus Mozart, featuring the ninety-voice Kenyon Community Choir and four student soloists. In addition, the Knox County Symphony will open the concert with “Nimrod” from the Enigma Variations by Edward Elgar, followed by the third movement from “Symphony No. 4 in E Minor” by Johannes Brahms.
Tickets will be available at the door. For more information, contact Sarah Goslee Reed at (740) 392-4955.
Parking at Kenyon College, particularly in proximity to Rosse Hall, is problematic due to heavy construction going on at the campus. People with accessibility issues are urged to leave a message to Benjamin Locke at 740-427-5200 so that plans can be made to offer assistance. Maps that show parking areas can be found on the Symphony website at www.knoxcountysymphony.org. Currently, masking is not required but still recommended depending on personal circumstances and/or consideration of others.
The Knox County Symphony is in its fifty-sixth year of continuous operation, made up of musicians primarily from Knox County, including community members, high school students and college students. The orchestra is conducted by Dr. Benjamin Locke who has been at the helm since 1984.
Each of the fourteen movements of Elgar’s “Enigma Variations” is said to represent, in musical form, a family member or close friend of the composer. Among the most popular is the ninth movement, “Nimrod,” titled after the biblical hunter. It turns out to be a double play on words, for the German word for hunter is Jaeger—the surname of publisher Augustus J. Jaeger who supported Elgar through some serious personal and professional crises.
The “Symphony No. 4 in E minor” demonstrates Brahms’s mastery of the symphonic form in the Romantic era. The third movement, the Allegro giocoso, uses the structure of rondo-variation to create a joyous effect. The themes are distinct and immediately recognizable when they appear, but Brahms makes surprisingly abrupt juxtapositions, extensions, and motivic changes that cause the listener to feel simultaneously centered and unbalanced, making for a most thrilling aural ride.
Many myths surround the composition of the “Requiem in D Minor” by Mozart, but all that is known as certain is that Mozart died on December 5, 1791, after working on the project for about three months. Only the first movement is entirely in Mozart’s hand; the movements up to the Hostias included vocal parts and a figured bass with occasional indications for string and woodwind parts, and Mozart completed only the first eight bars of the Lacrymosa. At the request of Mozart’s widow Constanze, the requiem was completed by Joseph Eybler and Franz Xaver Süssmayr. It is unclear how much was completed according to Mozart’s direction, but the Sanctus and Benedictus are considered to be entirely of Süssmayr’s invention.
Some recent musicologists believe that Mozart fully expected to recover from his final illness, but biographer H. C. Robbins Landon disagrees, describing moments during his final weeks when Mozart would break into tears while singing through portions of the work. He quotes Mozart as saying on the day he died, “Didn’t I say before that I was writing this requiem for myself?” The requiem was first performed in Vienna in 1792.
The four student soloists for the Mozart are Linnea Mumma, soprano, Rebecca Mucheru, mezzo-soprano, Drew Sutherland, tenor, and Bradley Berklich, baritone