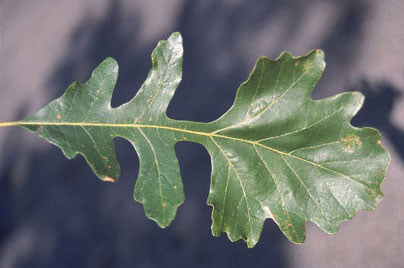 With Arbor Day coming up in a few weeks, let’s spotlight a native tree here in the buckeye state for Tree Tuesday – the Bur Oak!
The Bur Oak is found in all of Ohio except for the southeastern portion of the state, although it is most frequent in the western half of the state. Bur Oak is an Oak primarily of the Midwestern and Great Plains states, venturing into south-central Canada to the north, and Texas to the south. It is found in both continuously moist as well as very dry sites, and is the Oak that is most often found off by itself, standing alone in a farmer’s plowed field or in a flat bottomland.
The Bur Oak has large, bold-textured, leathery leaves that are alternate, obovate, and usually dark green. Leaf shape is highly variable in Bur Oak, but consists of about five to nine lobes of greatly different size, with the lower lobes very small, the central lobes average, and the upper lobes very large with crenate margins. The sinuses in the central portion of the leaf may be shallow, but are usually very deep (sometimes to the midrib), giving this leaf the approximate shape of a base fiddle.
For more info on this tree species, head to https://ohiodnr.gov/…/broad…/bur-oak-Quercus-macrocarpa. And did you know that April is Ohio Native Plant Month? For more info, head to https://www.ohionativeplantmonth.org/.
Ohio Department of Natural Resources Division of Forestry Ohio Department of Education