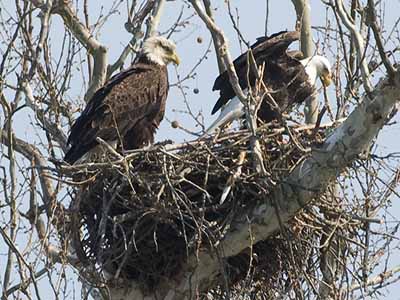 Bald eagle nesting success was at an estimated rate of 82% in the spring of 2021, and the number of young per nest was 1.6, well above the number of 1 per nest needed to sustain the population. These productivity rates are similar to previous years. The 2022 estimate will be released following the nesting season.

The Division of Wildlife’s bald eagle nesting survey consisted of flying five blocks, each roughly 10 square miles, to search for eagle nests in woodlots and along rivers. Two of the blocks, one near Sandusky on Lake Erie and the other over Mosquito Creek Wildlife Area in northeast Ohio, are flown every year. The other three blocks are rotated every year. The 2021 blocks were located around Killbuck Wildlife Area, Grand Lake St. Marys, and the Maumee River in Defiance and Henry counties.

“Bald eagle management by the Division of Wildlife includes habitat conservation with an emphasis on wetlands and wooded river corridors, working with rehabilitators who help injured birds recover, and helping to enforce protective state and federal laws,” said Division of Wildlife Chief Kendra Wecker. “We are incredibly proud that Ohio’s bald eagle population continues to improve and grow.”

Bald eagles thrive in spaces with clean water and fish, their preferred food. Lake Erie and other large waterbodies host the highest number of eagles because of easy access to food resources. All Ohioans can report a bald eagle nest at wildohio.gov or through the HuntFish OH mobile app.

2020 nest census
In 2020, a nest census was completed to locate every active bald eagle nest in Ohio. The results indicated Ohio had 707 active eagle nests in 85 counties. Most nests were confirmed on private property, with about 150 on public lands. Of those, 43 nests were located on Division of Wildlife properties.

More about Ohio’s bald eagles
The bald eagle was once an endangered species, with only four nesting pairs in Ohio in 1979. Thanks to partnerships between the Division of Wildlife, Ohio zoos, wildlife rehabilitation facilities, concerned landowners, and conservationists its population increased. After much hard work and continued conservation, the bald eagle was removed from the federal list of threatened and endangered species in 2007, and from Ohio’s list in 2012.

Bald eagles are protected under both state law and the federal Bald and Golden Eagle Protection Act, making it illegal to disturb bald eagles. When viewing these majestic birds, remember to respect the bird’s space and stay at least 100 yards away. Disturbing bald eagles at the nest site could lead the pair to abandon the eggs.

As with many of Ohio’s native wildlife species, bald eagles require specific habitat conditions to thrive. Bald eagle habitat protection and research is funded by the sale of bald eagle conservation license plates, income tax check-off donations to the Endangered Species and Wildlife Diversity Fund, and sales of the Ohio Wildlife Legacy Stamp. Learn how to support Ohio’s magnificent wildlife at wildohio.gov.

The mission of the Division of Wildlife is to conserve and improve fish and wildlife resources and their habitats for sustainable use and appreciation by all. Visit wildohio.gov to find out more.

ODNR ensures a balance between wise use and protection of our natural resources for the benefit of all. Visit the ODNR website at ohiodnr.gov.