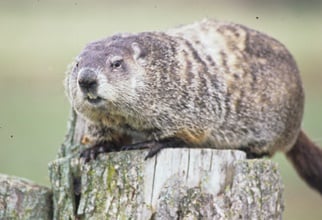 It’s Groundhog Day and just like last year we have two different predictions for the next several weeks. Punxsutawney Phil saw his shadow which means 6 more weeks of winter while our own Buckeye Chuck didn’t see his shadow which means an early spring – who will be right?!?!?!? So let’s find out a little more info about this furry animal for today’s Wildlife Wednesday.
When Ohio was first settled, groundhogs, also known as woodchucks, were a rare sight. However, as Ohio’s forested land was cleared for agricultural production, the number of groundhogs increased. Today, groundhogs can be found in all of Ohio’s 88 counties as well as throughout most of North America. Groundhogs are prevalent in the sandy gravel soil of east-central Ohio.
The head of a groundhog is broad and flat with small ears and eyes. The coarse fur is usually grizzled grayish brown with a reddish cast. The legs and feet are typically dark brown to black colored and are well suited for digging. Unlike the dark yellow colored incisors of other rodents, the groundhog’s incisors are white to ivory white.
Groundhogs live in open grasslands, pastures, and woodlands where it is easy to see predators such as man, hawks, or coyotes coming. Groundhogs prefer sandy, gravely soil perhaps because it is easier to dig in. Burrows can be located in forested areas, along heavy fencerow brush, or along undisturbed stream banks.
For more info on this rodent, head to https://ohiodnr.gov/…/animals/mammals/woodchuck-goundhog. Ohio Division of Wildlife Ohio Department of Education