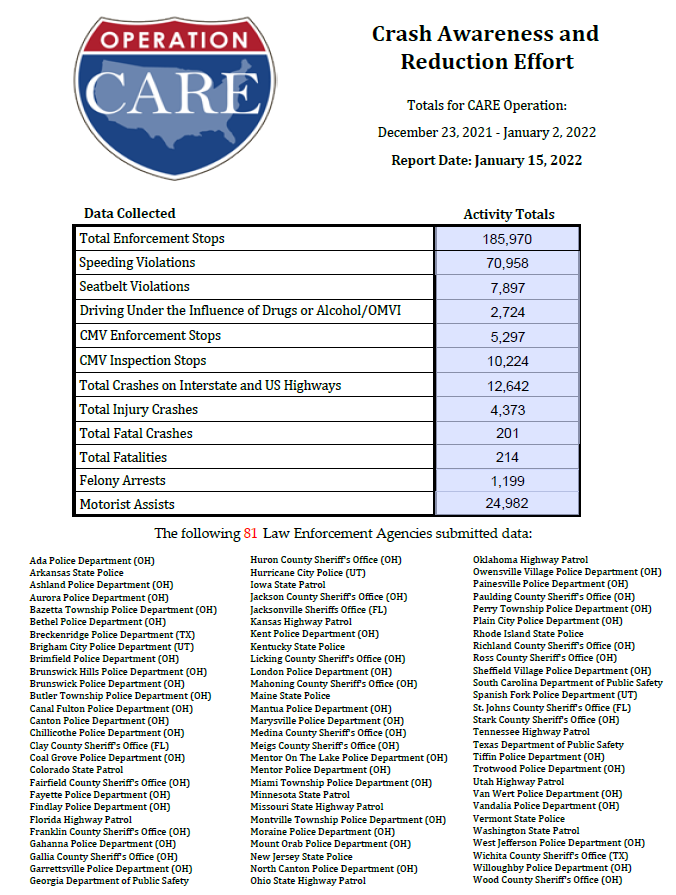 COLUMBUS – The Ohio State Highway Patrol joined forces with 80 other law enforcement agencies across the nation to bring crash awareness to motorists in an effort to reduce the number of crashes occurring across the United States. The initiative began on Thursday, December 23 at 12:01 a.m. and ended on Sunday, January 2 at 11:59 p.m.

Areas of focus included speed violations, safety belt usage, impaired driving, and commercial vehicle enforcement. A combined total of 185,970 enforcement stops were made by participating agencies during the effort, with 38 percent of those citations being speed-related. During this same timeframe, 12,642 crashes were investigated with 214 of these crashes involving fatalities.

“Joint efforts like this one are instrumental in combating the number of fatal crashes throughout the nation,” said Colonel Richard S. Fambro, Patrol superintendent. “Simple things like obeying the speed limit, wearing your safety belt and never driving impaired can ensure you make it to your destination safely.”

All motorists can assist law enforcement by reporting dangerous and reckless drivers to the Patrol by dialing #677.

CARE, Crash Awareness and Reduction Effort, is a section within the International Chiefs of Police. CARE provides law enforcement with information, training and a forum for discussion on roadway safety issues.