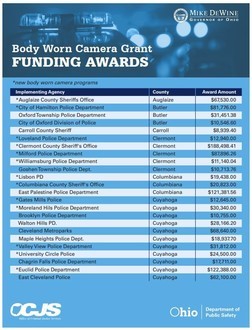 “Body cameras have quickly become a necessary tool for modern policing,” said Governor DeWine. “With these grants, more than four dozen law enforcement agencies that have never had body cameras before will be able to invest in this technology to help protect their officers and offer transparency to the public.”

Of the 109 local law enforcement agencies receiving grants, 49 will use funding to create new body-worn camera programs. The other 60 agencies will dedicate funding toward expanding or upgrading existing technology. In total, this funding will help agencies purchase around 1,700 new body cameras, as well as computer equipment, software, video storage, and more.

Governor DeWine prioritized the creation of the new Ohio Body-Worn Camera Grant Program in the state’s 2022-2023 operating budget, which was passed by the Ohio General Assembly last year. The grant program totals $10 million over the biennium, with the remaining grants to be offered in fiscal year 2023. Additional body-worn camera funding will also be offered as part of the $250 million that Governor DeWine and the Ohio General Assembly dedicated to law enforcement in December.

“This is just the start of many new ways we’ll be helping law enforcement with state-of-the-art tools and innovative programs to fight crime and protect the public,” said Governor DeWine.

The Ohio Body-Worn Camera Grant Program is part of Governor DeWine’s ongoing efforts to ensure that most, if not all, of Ohio’s law enforcement agencies have body cameras. In response to a directive from the Governor, the Ohio State Highway Patrol began outfitting troopers across the state with body-worn cameras last year.

The use of body cameras is not mandated in Ohio, and it is estimated that up to two-thirds of all law enforcement agencies in the state have not provided their officers with cameras due to equipment and video storage costs. Ohio’s Office of Criminal Justice Services, which is administering the grant program, received $16 million worth of grant requests for this round of funding. All qualifying agencies that applied for grants to establish new body-worn camera programs received funding in this round and the remaining funds went to existing programs to upgrade aging cameras, add storage capacity, or hire record-retention personnel. Qualifying agencies that applied but did not receive a grant are expected to be funded through future grant awards.