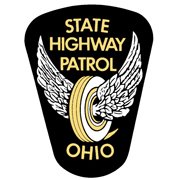 Trooper Fitzpatrick sustained serious injuries and was transported to Grant Medical Center. Thomas Ervin was not injured during the traffic crash.

This crash remains under investigation.