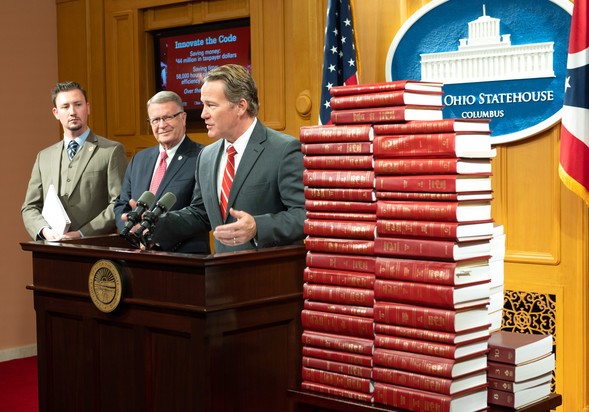 (COLUMBUS, Ohio)—Ohio Lt. Governor Jon Husted, who oversees Ohio’s Common Sense Initiative (CSI) and serves as director of InnovateOhio, was joined today by Senator Steve Wilson (R-Maineville) and Representative Thomas Hall (R-Madison Township) for a press conference to announce the introduction of a bill that would innovate Ohio’s laws, saving taxpayers approximately $44 million and saving the state approximately 58,000 hours of labor through efficiency improvements over the next ten years.

“For over 200 years, lawmakers have grown the size of the Ohio Revised Code, and with this bill, we aim to give it a trim,” said Lt. Governor Husted. “We did it in a smart way, using an artificial intelligence tool and human collaboration to identify outdated processes and unnecessary in-person interactions that will save millions of dollars and thousands of hours of people’s time and money.”

CSI has been using the tool in their work with state agencies to identify places in administrative rules and statutes that have not caught up with the speed of business and advancing technology, where outdated methods of communicating or in-person interactions are required.

The Innovate the Code legislation is a culmination of that effort. It removes costly processes and unnecessary barriers from the Revised Code, such as requirements to send notices via certified mail or to submit physical paper applications. Instead, these changes create flexibility for state government, as well as Ohioans and job creators, to utilize modern and future technologies.

The reforms included in the introduced legislation, and those to come, are estimated to save taxpayers $4.4 million and save the state approximately 5,800 hours of labor annually. For example, the Ohio Department of Taxation identified a notice that is currently required to send by certified mail. This legislation will allow it to communicate that notice to its customers electronically instead. This change not only saves taxpayer money, but it also streamlines the process for the Department of Taxation to provide important information to businesses and individuals through a secure online portal.

“I’m honored to be joining Lt. Governor Husted and Representative Hall in introducing this legislation,” said Senator Wilson. “This legislation not only saves the taxpayers money but continues the work of bringing state government into the 21st century.”

There are nearly a dozen other provisions included in the introduced bill that are expected to not only save money, but also save time, a valuable asset to job creators and businesses. As work progresses on this initiative, additional provisions continue to be identified – 100 and counting so far – that represent either an outdated communication method (telegram, fax machine, etc.) or unnecessary in-person interactions with government. These additional provisions are expected to be updated during the legislative committee process.

“I am grateful for the opportunity to modernize and streamline government here in Ohio. As new technology becomes readily available to us, our government must be ready to change with the times and use these advancements to our advantage,” said Representative Hall. “This legislation will save not only millions of dollars, but will save our state invaluable amounts of time and energy so that we are able to work better and more efficiently for the people of Ohio.”

“The policies in the Innovate the Code legislation are the types of policies that The Buckeye Institute has long championed and are commonsense ways to cut government red tape and save taxpayer dollars. By using AI to find antiquated and out-of-date communications requirements buried in Ohio law, the DeWine/Husted Administration is rolling back regulatory red tape and removing unnecessary regulations and requirements that make it more difficult for businesses to succeed.”

“Americans for Prosperity – Ohio would like to commend Lt. Governor Husted and his team at CSI for their thoughtful leadership and proactive efforts to drive efficiency in government services that will ultimately lower costs for taxpayers. Modernizing state law and thereby making steps of some compliance processes easier for Ohioans to navigate is undeniably a good thing. AFP would also like to thank Sen. Wilson and Rep. Hall for taking up this legislation, and we look forward to supporting the bills and working with the sponsors throughout the committee process.”