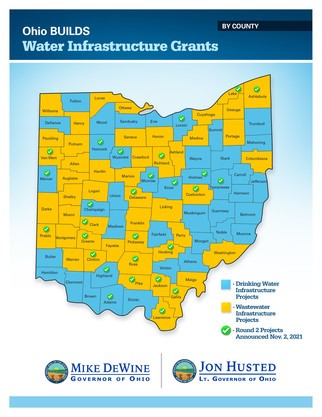 “It’s astonishing to me that there are communities in Ohio today where it’s difficult to get clean water. For our people to thrive and for our communities to grow, clean water and reliable infrastructure are an absolute must,” said Governor DeWine. “There is a tremendous need for water infrastructure upgrades all over our state, and through Ohio BUILDS, we’re funding projects that will be life-changing in some communities.”

A third round of grant recipients will be announced in the future.

The new Ohio BUILDS water infrastructure grants are a continuation of Governor DeWine’s H2Ohio initiative, which launched in 2019 to focus on ensuring plentiful, clean, and safe water for communities across the state. H2Ohio focuses on strategies to reduce algal blooms on Lake Erie and on other bodies of water statewide. The initiative has also awarded $15 million in grants for water infrastructure projects.

Ohio BUILDS (Broadband, Utilities, and Infrastructure for Local Development Success) will also focus on supporting targeted solutions that impact quality of life such as broadband expansion, brownfield redevelopment, the demolition of blighted buildings, and more.