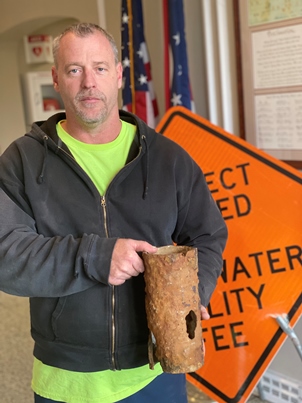 MOUNT VERNON, Nov. 2, 2021 – East Chestnut Street between North Gay and North Main streets will be closed beginning Wednesday morning, Nov. 3, 2021, for work that will result in the entire street being rebuilt. Detours will go up at 6 a.m. Wednesday. The construction is currently scheduled to be finished by 5 p.m. on Thursday, Nov. 18, 2021.

The reconstruction has been necessitated by a lightning strike on Aug. 12, 2021, that led to a water main break on East Chestnut. After that break was fixed, a leak persisted for another month because a service line had not been properly abandoned years earlier.

Workers removed the plates and filled in the holes in mid-September, but the damage to the street was such that a permanent reconstruction of East Chestnut between North Gay and North Main streets has been deemed necessary, according to City Engineer Brian Ball.

Ball said the pavement, as well as the bricks under the pavement and the concrete, will all be removed, and the entire street will be reconstructed. In addition, the gutters, curbs and sidewalk on the south side of East Chestnut will be rebuilt as well.

The City is using funds from the federal government’s American Rescue Plan Act (ARPA) to pay for this project.

Ball noted that it’s too cold now to lay permanent asphalt, so temporary asphalt and street markings will be laid down on East Chestnut Street at the close of the reconstruction project until the weather warms back up next year.

Updates on the project will be posted as needed on the City’s website, mountvernonohio.org, as well as the City’s Facebook page.