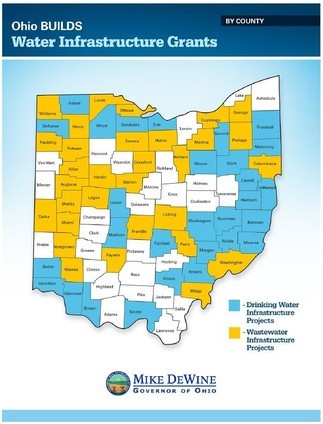 “These grants are about strengthening our future, our people, and our communities,” said Governor DeWine. “We want our kids and grandkids to stay in Ohio, and clean water is essential to the health and future of our state.  Protecting and ensuring that every community in Ohio has access to safe and clean water has been our mission from the start, and with these grants, we are continuing our mission to provide access to economic development tools that will help communities grow and thrive well into the future.”

“From the beginning of our administration, Governor DeWine and I have made water quality and protecting our natural resources in Ohio a priority, but water quality isn’t just about the environment and our health, it’s also about our economic future, ” said Lt. Governor Jon Husted. “Investing this one-time money we have on infrastructure will improve our quality of life today and protect it for future generations.”

The new Ohio BUILDS water infrastructure grants are a continuation of Governor DeWine’s H2Ohio initiative, which launched in 2019 to focus on ensuring plentiful, clean, and safe water for communities across the state. In addition to investing in strategies to reduce algal blooms on Lake Erie and other bodies of water statewide, H2Ohio has also awarded $15 million in grants for water infrastructure projects.

Ohio BUILDS (Broadband, Utilities, and Infrastructure for Local Development Success) will focus not only on strengthening Ohio’s communities through water infrastructure upgrades, but it will also make other necessary investments in targeted solutions that impact quality of life such as broadband expansion, brownfield redevelopment, the demolition of blighted buildings, and more.

Additional announcements regarding Ohio BUILDS projects that will strategically invest to transform lives and strengthen Ohio’s future will be made in the coming months.