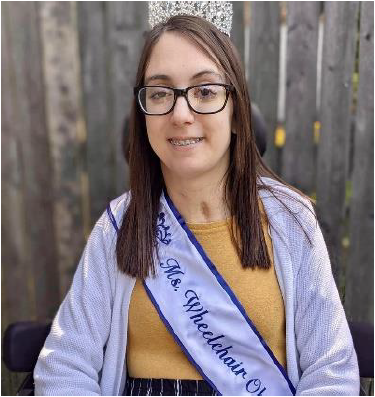 Laura Sykes on a mission to increase awareness of disability issues

MOUNT VERNON, Oct. 4, 2021 – Laura Sykes’ life changed as dramatically as any life can on Nov. 13, 2015, when a vehicle she was riding in was struck by a tractor-trailer.
As a result of the accident, Sykes’ spinal cord was shattered and she has not walked since. But since that event, which occurred when Sykes, then 21, was working as a restaurant server in Ontario, Ohio, her life has gone in an entirely new direction.
Sykes, the current Ms. Wheelchair Ohio, will be in Mount Vernon on Tuesday, Oct. 5, to meet with community leaders and bring awareness to what has become her mission – to educate, support and encourage those with spinal cord injuries to never give up on achieving their dreams.
Sykes is scheduled to meet with Anthony McNeal of Main Street Mount Vernon and the media Tuesday at Stein Brewing Company, followed by a meeting with Mayor Matt Starr at City Hall.
When Sykes became paralyzed, she wasn’t sure whether college was in her future, but her doctors and nurses at The Ohio State University’s Wexner Medical Center urged her to consider it. Sykes has since graduated with a degree in human services from North Central State College. She was also made aware of the Ms. Wheelchair Ohio pageant.
Although pageants had never been her thing, Sykes decided to pursue the opportunity, and she was crowned Ms. Wheelchair Ohio last year. This past summer she competed in the national Ms. Wheelchair pageant in Little Rock, Ark.
Her platform for the pageant was “Sudden Impact,” emphasizing how one moment can unexpectedly impact every aspect of one’s life, not to mention those of friends and family.
For Sykes, now 27, that moment in 2015 has opened several new doors for her, and as Ms. Wheelchair Ohio she is devoting much of her time traveling the state to increase awareness of the fact that 350,000 Americans like her face challenges the rest of us have probably never imagined. She is also focused on mentoring new disability advocates.
Laura Sykes is on a mission, literally, one that on Tuesday will bring her to Mount Vernon to open some eyes.