MOUNT VERNON, Sept. 10, 2021 – Columbia Gas has announced plans to install 11,000 feet of new plastic pipe on the west side of Mount Vernon beginning next week. About 200 residences in the area will be impacted by the project. The utility has scheduled two virtual meetings to address residents’ questions and concerns.

The new pipelines will replace the main natural gas line and service lines connecting homes and businesses to the Columbia Gas system. The utility will schedule appointments with property owners to connect the new service lines. The project may entail some evening and weekend work by the utility’s contractor, Mid-Ohio Pipeline. 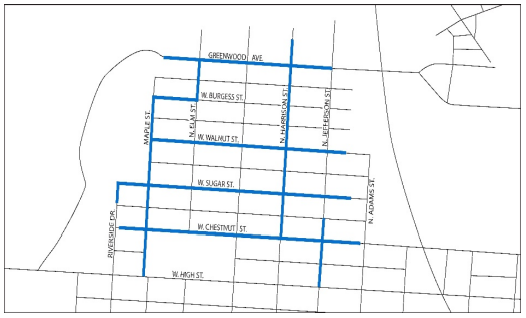 Columbia Gas noted that the pipeline will cause some short-term disruptions to the neighborhood, from occasional gas outages of two to four hours to the digging up of yards, sidewalks and streets. Indoor gas meters will also be relocated as part of the project. The utility stressed that workers will repair or replace any sidewalks, driveways and landscaping disturbed by the work.

“The new pipe has several benefits, including enhanced safety features and the ability to bend to the Earth’s contour while expanding and contracting with shifting temperatures,” Benjamin Cutler of Columbia Gas said in a press release. “Once installed, the modernized system will last longer and reduce the amount of future maintenance required for upkeep.”

Columbia Gas asks that residents contact Cutler at 216-215-4103 to share information about buried sprinkler or septic systems, invisible fences or cisterns, or to discuss other concerns about the pipeline project.

For more information on the project, visit ColumbiaGasOhio.com/Replacement. For a short video explaining the process, visit vimeo.com/481327238.