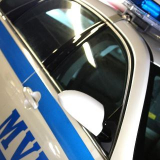 August 25
An officer responded to a harassment complaint on Kirk Street.

August 26
An officer was dispatched to the 1000 block of Newark Road for a complaint. Upon arrival, the officer spoke to the complainant who advised he had fired an employee who was harassing him. The complainant advised his lawyer wanted him to file a report for documentation. A statement was collected. Nothing further.

August 27
Units were dispatched to Sandusky and Madison Streets for a suspicious vehicle. Drug paraphernalia was seized for destruction.

An officer was dispatched to a vandalism that occurred on West Curtis Street. Upon arrival, the officer spoke to the complainant over the phone, who stated that someone placed a screw in the sidewall of the tire on her vehicle. A report was taken. Nothing further to report at this time.

August 28
Officers responded to Knox Community Hospital in reference to a disturbance. Upon arrival, the officer spoke with ER staff that stated a male that MVFD brought in was acting out ad trying to attack security. The officer made contact with the male, Roger Legg, who was subsequently arrested and charged with disorderly conduct in a medical facility and transported to the Knox County Jail without incident.

Information was received that someone was going to cut catalytic converters off of cars at a business on Coshocton Avenue. At approximately 10:13 PM, a male was going through the lot. Contact was made with the male who had removed a brake rotor from the bed of a truck. Michael Snyder was arrested and transported to the Knox County Jail. He was charged with criminal trespass, criminal mischief and falsification. Probation also placed a holder on him.

August 29
Officers responded to McGibney Road on a disturbance. Upon arrival, the officer spoke to the complainant and two females. It was determined that it was a civil issue and information was given to attempt to relive the issue. While still on the call, the complainant called 911 and asked for a supervisor. A report was taken and will be forwarded to the Prosecutor. Nothing further to report at this time.

An officer was patrolling in the 600 block of Coshocton Avenue when they observed a female jump out of a moving vehicle and assault a male walking on the sidewalk. The male declined to pursue charges.

August 25
James A. Meola was cited for operating a motor vehicle without a valid license.
Terry B. Wilkinson was cited for expired registration and failure to reinstate license.

August 26
Paul A. Thomas was cited for operating a motor vehicle without a valid license.
Micah J. Grashel was cited for an expired plate/validation sticker.
Genevieve J. Daniels was cited for fictitious license plates and driving under an FRA suspension.

August 29
Jeremy A. Blankenship was cited for transfer of ownership/registration, driving under suspension and was arrested on an outstanding warrant.
Ila M. Lester-Garris was cited for driving on a temporary permit without a licensed driver.