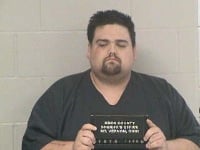 Late Friday afternoon, a Knox County jury returned guilty verdicts against Caleb Sarge on counts of murder with a firearm specification and tampering with evidence.
The jury found that Sarge, 28, of Mount Vernon, murdered John Serio with a handgun in November 2019, and tampered with Serio’s cell phone in an attempt to hide evidence of the crime.
Jurors heard about three days of testimony from police, firearms experts, the medical examiner and people who knew Sarge at the time. On Thursday, the jury heard testimony that Sarge had asked multiple people to help him dispose of Serio’s body.
Under Ohio law, a murder charge carries a life sentence with parole eligibility after 15 years. The firearm specification carries a mandatory three year sentence which will be served consecutively. Tampering with evidence carries a sentence of 3-36 months in prison.
Prosecutor McConville will be asking the court to impose the maximum sentence, which would be a life term with parole eligibility after 21 years.
Sentencing is set for April 8, 2021.