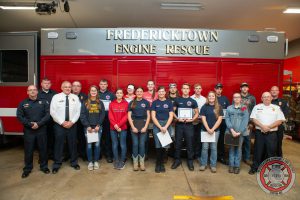 Family, friends, and local firefighters met on Monday evening at the Fredericktown Community Fire District to celebrate the graduation of the most recent academy class from the Fire Cadet Program. A crowd of around 65 were present to congratulate and hear about each of the cadets and their progress and involvement at the FCFD. Cadets in the program are in grades 9-12 and come from Fredericktown, Clear Fork, Mount Vernon, and those who are homeschooled. Currently, the roster is at 15 young men and women that actively participate not only in their training but also train and respond with the firefighters on calls.

Receiving certificates from the FCFD were:

Also pictured is Aspen Maggard, who is currently a recruit and joined the program toward the end of the academy.

“There is an amazing group of young men and women here at the FCFD serving the community,” said FCFD Cadet Advisor Jason Bostic. “We are very blessed that they show such a commitment to our fire district and they want to be here. We can’t thank the parents and loved ones enough for entrusting them to our us and making sure they are here to train and work.”

The summer-long cadet program trains the high school-aged young men and women in varying aspects of the fire service, closely following curriculum that they would see when obtaining their State fire certification. Cadets are instructed in topics such as fire history, SCBA, personal protective equipment, forcible entry, hydrants, ladders, search and rescue, water movement, vehicle extrication, tools and equipment, and much more.

“Training that they receive and the knowledge they retain is put to work in our community. Our cadet program is not a club, an extra-curricular activity, or a social activity,” said Bostic. “They are held to a standard and when called to work, they put forth an amazing effort that makes a difference.”

Training the cadets is far from an easy task and is no small commitment on anyone’s part, but the support of the program at the FCFD starts from the top down with Chief Scott Mast. Numerous instructors take part throughout the summer academy and year-round to present topics. During the academy it is weekly training, then drops back to twice monthly the rest of the year. Assistant Chief Dwayne Canter, Captain Shane Smith, Lieutenant Jeremy Moss, Lieutenant Kevin Suain, Lieutenant Charles Swank, and others have been a huge part of stepping in as instructors over the last year with assistance from other line firefighters.

Once the cadets have passed the academy, they are permitted to respond on calls with the fire district where their skills can be put to great use. While there are many aspects of firefighting that they are not permitted to participate in, there are a great deal of support areas on a scene where they make a huge difference.

“They are one of us, part of our family and are treated as such. A great deal of success is in how we as firefighters perceive them and treat them with respect,” said Bostic. “They work hard, we treat them like equals, and we work side-by-side.”

Beyond the training, the cadets at the FCFD are provided with safety equipment almost identical to the firefighters but are clearly marked so they can’t be mistaken. They are given many opportunities throughout the year to participate not only in training, but responses on fire/rescue calls, helping with fire prevention presentations, philanthropy, and other areas of serving the community.

“Yes, we are providing them a great insight into the fire service with the training they do, but that is not the most important aspect. Our goal is to empower, teach, and equip them to be outstanding young men and women with skills that will help them in life,” said Bostic. “If we are lucky and they choose to take the path as a firefighter, then we are blessed even more that they are prepared for that step.”

Those involved in this program are highly active in their community and possess a drive that makes this program work well. Cadets outside of the FCFD are involved in sports, marching band, FFA, 4-H, church, choir, drama productions, other civic organizations, and much more.

If you or someone you know is interested in becoming part of this program, please contact Firefighter Jason Bostic at jbostic@fredericktownfire.net or 740-485-6790.