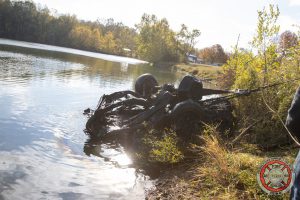 Last week, several firefighters tested out the new system in a local lake just outside the village limits with the permission of property owner Mike Cockrell. In the short time that our boat crew was on the water, several targets of interest were marked with GPS and images captured.

Members of the Fredericktown Community Fire District met on Saturday morning for regularly scheduled training for their rescue divers. This would be the first dive since the FCFD was recently awarded grant money from The Ariel Foundation to replace our sonar system on our dive rescue boat.

“We purchased through Knox Marine here locally,” said FCFD Captain Shane Smith. “They pointed me in the direction of the system we went with and were more than willing to answer questions and show us the options. They did a really good job with this and in a timely manner.”

Shortly before 8:00 am the boat was in the water, dropping a buoy on the first target with the most interest, what appeared to be an old vehicle that was upside down. Typically, in the past, our buoys that were used to mark targets just floated in a general area with a weight that would sink to the bottom. The new buoy that was fabricated by FCFD diver Tom Durbin has a bright marker above water and a device that allows it to be seen underwater on the new sonar system. Once the marker was in place, divers entered the water and were able to easily find the target and spot the buoy underwater from about 10 feet away. As the boat monitored the operation from sonar on the top of the water, radio communications with the divers indeed verified that there was a vehicle almost completely covered in silt at the bottom of the lake.

Still new to working with the updated sonar system, members were very impressed with the clarity and quality of what they were now able to see and how this has improved the mission of the department.

“You could see the four tires, the driveline, and the entire undercarriage. With the new sonar system, it’s almost like watching television,” said Captain Smith. “The sonar shows the hazards that are underwater that you can’t see from the topside. You will know if there is a steep drop or things to entangle in, its crystal clear.”

Divers attached a rope to the vehicle and surfaced, waiting for Cockrell, owner of Fredericktown Marathon to arrive with a large wrecker to remove the vehicle. With the amount of silt that had accumulated around the entire vehicle, it made it difficult to find places to attach a rope or cable to.

“Mike has always been very supportive of the department with whatever we need,” said FCFD Chief Scott Mast. In this case, we felt we had a vehicle that needed to be examined to see what it was and why it was there. He was more than willing to come out on a Saturday morning and assist us.

When Cockrell arrived, divers went back under the water to attach a cable from the wrecker to the vehicle and remove it from the bottom. On the third attempt after several pieces of the vehicle broke away, it was brought to the surface, and the amount of time it had been under was very clear. The time underwater had almost completely destroyed the frame and a good majority of the vehicle and it tore apart on the way out of the water.

“Unfortunately, with the level of time that the vehicle was in the water and the amount of damage that it sustained in that time, there is not too much identifiable on it right now,” said Chief Mast.

With a little bit of work, those on the scene at the dive were able to use a taillight from the vehicle to begin narrowing the search. After more research, several key features on the vehicle that were present have it as a 1970 Oldsmobile Cutlass, most likely with the original tires on it. This one appears to have had significant damage to the driver’s side of the front bumper.

The FCFD has additional dives planned to check the remaining targets that have been mapped around the lake and once again would like to thank Mike Cockrell for his support and permission to train in this body of water.