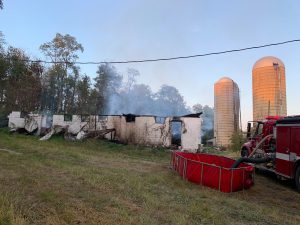 Smoke could be seen from several miles out. Chief 411 found a roughly 60×80 barn that was on the ground and burning. The first arriving engine (E413) stretched two, 1 ¾ attack lines and began suppression. A portable tank was setup for tankers to dump into. Additional incoming firefighters worked to remove sections of roof and timber so the fire could be extinguished. A third line was stretched to reach around further into another area of the barn.

Water supply was setup at a nearby dry hydrant by R415. Roughly 23,000 gallons of water were utilized during the operation.   The FCFD had 13 firefighters and four cadets respond to the call. All FCFD units were back in quarters by 8:47 pm.